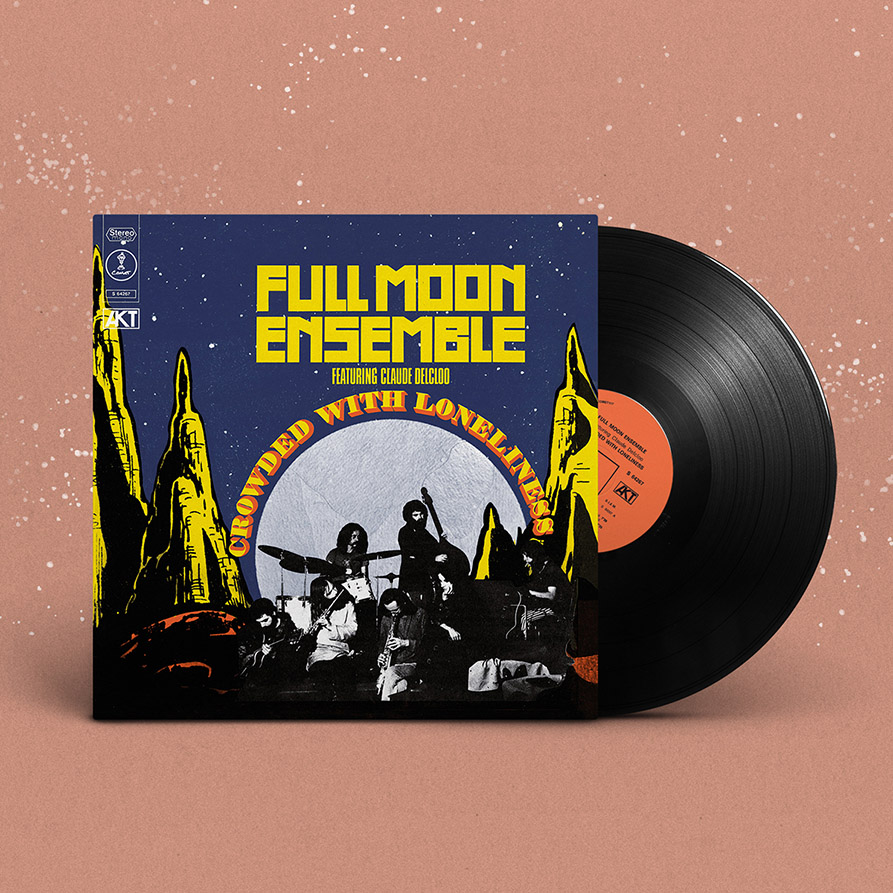 First reissue out of the Comet new reissue series of cult French Free Jazz LP from 1974 produced by Claude Delcloo, check the classic ‘samba miaou’, like a lost Pharoah Sanders tune mixed with politically-engaged French poetry but the whole LP is varied, avant-garde and spiritual now available as Vinyl LP with Gatefold cover, set to become collectible as the original is impossible to find.

A French Free Jazz Band, the Full Moon Ensemble was born at the end of the 60s under the leadership of the versatile and ubiquitous Claude Delcloo.

Delcloo was an eminent drummer who played and recorded with Jazz legends such as Archie Shepp, Arthur Jones, Jacques Coursil or Burton Greene. He was also a smart producer and the co-founder of the Actuel/Byg and AKT labels which helped release timeless underground, progressive Jazz records by some of the most creative young talents living in France
back then (Grachan Moncur, Art Ensemble Of Chicago, Sun Ra Arkestra, Moving Gelatine Plates, Rhesus O, Cane & Able, etc …). Delcloo’s visionary mind is still up-to-date at the beginning of the 21st century!

At the end of 1970, Delcloo’s ongoing project, the Full Moon Ensemble, recorded ‘Crowded With Loneliness’ – their only album – with guitar player Joseph Dejean (also a member of the Cohelmec Ensemble), horn players Jeff Sicard and Gerard Coppéré (who later also played with Dharma Quintet and Machi Oul), pianist Martine Tourreil, american bass player Ron Miller and the enigmatic singer Sarah Touati who disappeared early. They were also later credited on one of Archie Shepp’s live LPs released on the BYG label (volumes 38 and 39) but only their rhythm section was featured.

The Full Moon Ensemble was a free-minded collective project that sounded more like Pharoah Sanders and the early 70s American politically-engaged Spiritual Jazz scene than any other French Jazz bands of that time (even though Francois Tusques, Jef Gilson and a few others did remarkable works during those years). Most of the lyrics as well as the album title were inspired by US poet Bob Kaufman; this helped give these recording sessions such a unique style between Jazz poetry, vocal Free Jazz or protest Jazz.

Sadly, after a few gigs in France and confronted to the lack of commercial success, most of the Full Moon Ensemble members left for other bands and projects, leaving behind ‘Crowded With Loneliness’ as a testament of
their collective work. Up until now, this album has been one of the French holy grail records in Spiritual Jazz collectors circles, mainly owed to the track ‘Samba Miaou’ which appeared in several compilations over the last 20 years but never in its entire form.

Comet Records is now proud to make this record available again in its original format and digital; due to be out in Fall 2022.