Tony Allen is best known as the drummer for Nigerian iconoclast Fela Anikulapo-Kuti’s band. Together they created the powerful revolutionary music- Afro-Beat that sprang out of southern Nigeria in the late 60’s.

It’s been a long journey from Tony’s early beginnings in Yorouba land, Nigeria, where he soaked in Ebo rhythms, to the European and North American studios, clubs and concert halls. Still, Allen is committed to keeping the Afrobeat fires burning, working with his band, Afrobeat 2000 as well as collaborating with a talented new generation of musicians to renew Afrobeat and bring it into the new millennium.

“Without Tony Allen, there’d be no Afrobeat.”

“Tony Allen really got me dancin’ ”

“Perhaps the greatest drummer ever”

“Rhythm is the most perceptible and the least material thing in the world,” wrote John Miller Chernoff in his acclaimed book, African Rhythm and African Sensibility. It has been thirty years since this remarkable study inspired Brian Eno and David Byrne to completely revise their approach to music. Although in all honesty, if African rhythms began to alter the course of Western pop music, it is above all down to Tony Allen. No drummer better embodies the primordial vitality of those rhythms, nor devotes greater energy to maintaining their presence at the cutting edge of modern music. During his fifty–‐year career, Allen revolutionised the musical landscape of an entire continent, before embarking on a series of international collaborations that made him a benchmark for musicians worldwide. Now his tenth album, Film of Life, looks back on those amazing adventures whilst continuing to explore new horizons with all the drummer’s characteristic fervour and dexterity.

Born in Lagos in 1940, Tony Oladipo Allen never took up traditional African percussion instruments, but when working as a technician for Nigerian national radio he discovered and was immediately drawn to their distant cousin: the drums. A true autodidact, it was by listening to the recordings of the great American bebop drummers, Art Blakey and Max Roach, that he invented a technique he would gradually refine by honing his command of the cymbals – in particular the hi–‐hat, little used by African drummers – and the tom–‐toms. In the mid–‐1960s his destiny was to change forever when he met a fresh young graduate of the Trinity College of Music recently returned from England, a trumpet player by the name of Fela Anikulapo Kuti. Their collaboration began as original co–‐members of the renowned highlife–‐jazz band, Koola Lobitos, before taking on far more epic proportions when Kuti set the world on fire with Afrobeat.

Where the rhythmic patterns of Yoruba meet instrumental funk, with lyrics shot through with the rhetoric of the Black Panthers and theories of Pan–‐Africanism, this revolutionary new style saw Kuti hailed as the “Black President” of Afrobeat. His position was upheld by the supple yet precise rhythms of Allen’s human metronome for over fifteen years before their paths diverged.

Allen went on to pursue his solo career, forging a path between his loyalty to the original Afrobeat and his newfound freedom to explore a multiplicity of musical directions from dub, to space jazz, to international pop. Since his first encounter with Damon Albarn in 2006, Tony has been a member of the groups The Good, The Bad and The Queen and Rocket Juice & the Moon, projects both led by the Blur singer. Sought out by an ever–‐ increasing number of artists, he recently worked with Charlotte Gainsbourg and Sébastien Tellier, as well as Joe Lovano.

COMET RECORDS IS SO THRILLED TO PRESENT PSYCO ON DA BUS 20TH ANNIVERSARY, FOR THE OCCASION IT WILL BE REISSUED AS A DOUBLE VINYL LP AND NEWLY REMASTERED. Recorded in…
laurent hermouet
Love1 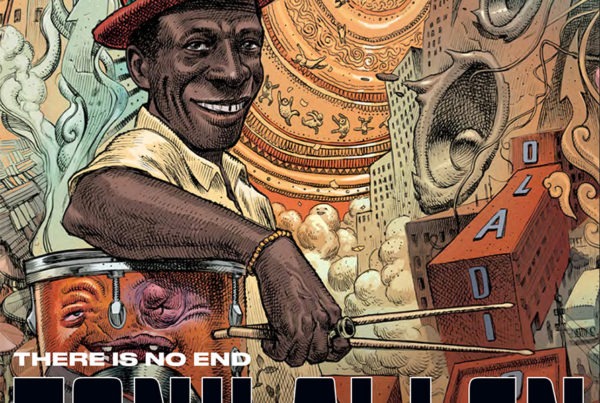 Tony Allen
There is No End

TONY ALLEN’S LAST ALBUM THERE IS NO END OUT MAY 7TH ON BLUE NOTE RECORDS "I play yours, you play mine. The music never ends." The wisdom of Tony Allen's…
laurent hermouet
Love1